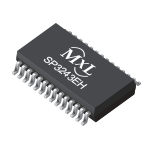 The SP3243E products are 3 driver/5 receiver RS-232 transceiver solutions intended for portable or hand-held applications such as notebook and palmtop computers. The SP3243E includes one complementary receiver that remains alert to monitor an external device's Ring Indicate signal while the device is shutdown. The SP3243E and EB devices feature slew-rate limited outputs for reduced crosstalk and EMI. The "U" and "H" series are optimized for high speed with data rates up to 1Mbps, easily meeting the demands of high speed RS-232 applications. The SP3243E series uses an internal high-efficiency, charge-pump power supply that requires only 0.1μF capacitors in 3.3V operation. This charge pump and MaxLinear's driver architecture allow the SP3243E series to deliver compliant RS-232 performance from a single power supply ranging from +3.0V to +5.5V. The AUTO ON-LINE® feature allows the device to automatically "wake-up" during a shutdown state when an RS-232 cable is connected and a connected peripheral is turned on. Otherwise, the device automatically shuts itself down drawing less than 1μA.

The Parts & Purchasing section of the product page shows the Status of all orderable part numbers for that product.  Click Show obsolete parts, to see all EOL or OBS products.